I found this on the internet:

Over the years, I have come to realize that the greatest trap in our life is not success, popularity, or power, but self-rejection. Success, popularity, and power can indeed present a great temptation, but their seductive quality often comes from the way they are part of the much larger temptation to self-rejection. When we have come to believe in the voices that call us worthless and unlovable, then success, popularity, and power are easily perceived as attractive solutions. The real trap, however, is self-rejection. As soon as someone accuses me or criticizes me, as soon as I am rejected, left alone, or abandoned, I find myself thinking, "Well, that proves once again that I am a nobody." ... [My dark side says,] I am no good... I deserve to be pushed aside, forgotten, rejected, and abandoned.

I could very much relate to this part of the post, I really recognize that feeling and that train of thought, although I don't think I have ever consciously sought power to compensate or anything, but I know the temptation of self-rejection pretty well. I left out the rest of his comment because he started telling that praying and the church was the answer, I tent to disagree with him there.

But self-rejection is quite easy to give into, specially when several people in a row reject you in one way or the other. It's also quite unhealthy to give in to, I know, I have been there, it's so easy to blame yourself even if you have no idea if you actually did something wrong or what. I mean, look at me, I have had several bad relationships in a row and even though I knew consciously that I probably didn't do anything wrong and that somehow I just fell for the wrong kind of women, but do you have any idea how hard it is to not doubt yourself extremely in situations like that?

Something similar happened to me as a kid, I was born in Den Haag, I moved to a small village in Drenthe (Drouwen) when I was 1,5 years old, I really couldn't remember Den Haag, but of course I didn't speak the local dialect when I started primary school so people started bullying me, it also didn't help that I was the smallest kid in the class or that I had teachers who just didn't care. I thought it was my fault, it couldn't be that my whole school was wrong so that meant they had to be right and I had to be a piece of shit. It's very easy to become an insecure kid after something like that, even more so if you have a dad and a brother who continue the teasing and bullying at home so you can learn to easier deal with it...

And trust me, it can take years and years to get over something like that. Even more so if the rejections keep continuing throughout the rest of your life, it gives you regular setbacks and periods in which you start to believe things are going bad because you are a bad person or because somehow you have deserved this. For myself I have 2 quotes to remind myself it really isn't my fault and that most people can't imagine how much they hurt or scar people by putting them down.

I am quite content in believing that live is unfair. And I am happy that it is. Imagine live would be fair. Imagine we deserved all the bad things that happen to us in live, imagine what complete shitheads we have to be to actually deserve everything that live throws at us. Imagine what our world and our lives would be like if we actually deserved every bad thing that happened to us. Imagine how many bad things you have to do yourself to get there. So I am glad that live is unfair and I hope it stays that way. 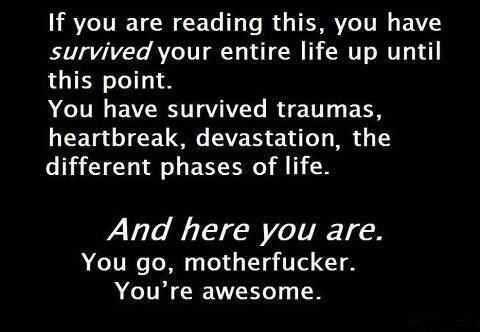 And this one in the image of course which is also on the front page of this site:

Both of these quotes have helped me overcome a lot of my insecurities, although sometimes it's hard to actually believe in them and to not think it is all so pointless, specially when you are trying to get over your 8-th failed relationship ;)

Anyways, contrary to what the man who posted the first quote believes, I don't think you need to find god or the church to overcome this, it might help for some people, but what is more important is that you have at least one or two good friends or relatives who believe in you and show that sometimes. I had and have a few of these friends and they helped me overcome several broken hearts, lost jobs, pets who died and just in general been there for me. These are things that help people who don't believe in them self, these are things people need.

And parents, if your kid ever gets teased or bullied a lot at school, don't continue that at home, give a child like that a loving environment and give him or her the attention he/she needs, my parents failed at that and it really didn't make my life or theirs easier when I was a teenager. Of course, I am not the easiest person myself, please don't think I am trying to blame my problems on my parents or the way they raised me.

After all, they may have done some things bad, but I personally think I am a good and nice person, always ready to help people, that's also something which I get from my parents I think, so don't worry, they did a good enough job, after all, kids don't come with manuals (unfortunately). However, I do know that love is a very important quality to show your children, also love for pets and your husband/wife.

Anyway, back to self-rejection instead of a rant about how to raise children, who am I to tell someone that, I don't even have children of my own.

Self-rejection or insecurity about yourself is an easy pit to fall in and a hard one to get out of, it's not exactly the same but it has basically the same effect and the same basis I think, self-rejection is just taking your insecurities to the next level in most cases I am afraid. And since people crave each others approval and company as a basic human need it's somehow way easier to blame yourself instead of the people you hang out with if several of them put you down, tease you, bully you or reject you in other ways. This is something to watch out for for most of us I think. There is no easy solution, the best advise I can give as someone who has been there and occasionally still visits that part of the human psyche is to continue living and find people who are true friends and not those who abuse you but those who support you and take you seriously even if you have a stupid idea. And try finding as much joy in your life as you can, just try not to follow my example and let the joy end in heartbreak, that doesn't help so much :p

A final quote for people to think about whether it comes to bullying or to love or in general putting people down without good reason:

There are wounds that never show on the body that are deeper and more hurtful than anything that bleeds, please try not to be the cause of them.

Of course, the close friends who have helped me so much the past few years are again chasalin and Isis, friends for whom I am very grateful.

Several hours after writing this I saw this link on Facebook.

The movie below was on this page and it is closely related to what I have written here. After watching this movie I felt very sad for a few moments, I really understand how this man felt even though he was a bit dramatic about it.